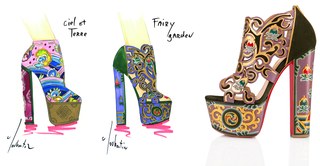 Christian Louboutin—the accessories virtuoso whose signature scarlet soles have become world famous, whether seen as vermillion flashes while walking down Rodeo Drive or worshipped as objects of aspirational acquisition in Cardi B songs—has, in his own way, written a sort of love letter to the Kingdom of Bhutan.

He first traveled there in 2012. The instantness of his attraction struck deeper than the appeal of the region's abundant color and vertiginous landscapes.

“People often think that tradition is a little outdated,” the designer tells W. “Yet Bhutanese traditions do not hinder the modernity of the country. The people maintain a gentle peace… and they are far ahead of their time. For example, the Bhutanese have this idea of ‘gross national happiness,’ which is currently being studied by the United Nations.” (Gross National Happiness, abbreviated to GNH, is a governing philosophy in the kingdom; it monitors the combined well-being and mood of the Bhutanese populace.)

Tonight, Louboutin partners with Phillips Auction House in New York City to open an exhibition dubbed “LouBhoutan,” which showcases handmade shoes that have been fashioned in collaboration with artisans-in-training at the National Institute for Zorig Chusum (the School of the 13 Royal Crafts of Bhutan) in the country’s capital city. To note, regarding the spelling: in French, Bhutan is Bhoutan.

The development process—unfolding over six years of creative back and forth between the designer and the school—has resulted in 13 limited-edition, soaring-high (a Louboutin given) ideas based on students' sketches, which were initially revealed this past summer in Paris. Though the final products exist more as objets d’art; the platform components of the shoes on display at Phillips are all hand-hewn from blocks of wood.

Iterations include “Fairy Garden,” an intricate, towering option layered in shades of olive, gold and icy rose, with Buddhist lotuses on the heel, and “Mystic Clouds,” an equally as sky-scraping bootie dyed in open-expanse midnight blue with overlaid puffs of glowing stratus vapor. While the platforms for each model were conceived of and carved in Bhutan, uppers were designed as a complement by Louboutin, and produced in Italy.

The designer concludes: “[the place] is straight out of a fairytale. Bhutan is impressive.”

The LouBhoutan exhibition will remain open through December 22, 2019, and the collection is for sale at Christian Louboutin on Madison Avenue in New York City, as well as in Paris, London, Dubai and New Delhi.