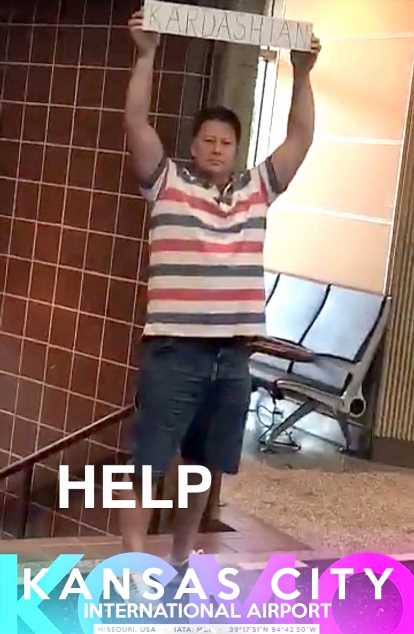 A Kansas father, who routinely picks up his daughter from a local airport, is going the extra mile to ensure that she truly feels welcome when she arrives home.

What started as Doug Payne’s one-time surprise at the airport terminal for his daughter Courtney Payne has now transformed into a tri-annual greeting — complete with costumes and hilarious pick-up signs.

“He’s always been a comedian,” Courtney, 24, tells PEOPLE of her father, a retired cop who has now gone viral for dressing up in creative costumes, varying from an elf to a professional driver, and holding up signs as he waits for her at the airport.

The hijinks began in Nov. 2018 when Courtney, a graduate student at Oregon Health and Science University in Portland, returned home from school, thinking that Doug, 53, would be waiting for her at the terminal of Kansas City International Airport.

As expected, the former police officer was there — but he decided to playfully stand at the airport entrance in jean shorts and a striped polo, proudly holding up a white sign that read “Kardashian” in black ink.

Understandably caught off guard, Courtney laughed off the first joke, which Doug says was inspired by other airport drivers, before posting a photo of her dad onto her Snapchat story.

“Some people would ask me, ‘Is it really the Kardashians?’ and I’ll say, ‘Yeah! It’s Daniel Kardashian,’ or somebody who’s not even a Kardashian,” Doug explains. “It seemed like a lot of her friends thought that it was kinda funny.”

The next time Courtney flew into the Kansas airport, Doug returned to his spot and waited with an even bigger — and brighter — sign.

This time, the father of two, donning a plaid button-down and pants, held up a neon green poster board that read “Welcome to KC Miss Oregon Courtney Payne”

“I did the Miss Oregon, which wasn’t a lie because she is a miss and from Oregon,” Doug jokes to PEOPLE.

RELATED: Dad Surprises His Daughter, 5, with a Captain Marvel Movie Poster — Featuring Her as the Heroine

His antics only went up from there and by the time Courtney returned home for Thanksgiving in November, her father was waiting in an all-black suit with a gold, sparkly sign that read “KC Welcomes Miranda Lambert.”

“I was trying to think who she closest resembled,” Doug explains. “And of course, some people think, ‘Oh, Miranda Lambert is gonna get off the plane,’ but I don’t think she flies commercial airlines!”

During that time, Courtney says her dad’s believable appearance and sign caught the attention of several airport-goers.

“There were little kids who walked by — maybe [age] 7 or 8 with their grandparents — looking and trying to figure out what was happening,” Courtney says.

But it wasn’t until recently that Doug took his airport surprise to the highest level, showing up as an elf in a green and red ensemble. Beside him, Doug held another gold sparkly sign that said “Santa’s Naughty List” written over an illustration of a scroll and had Courtney’s name written below.

“The last idea was around Christmas time and I thought, ‘What can I dress up as?’ So I came up with the elf idea and made up the naughty list with her name on it,” he explains.

“Some people at the airport, when they first saw me as an elf, they probably thought I was a deranged individual,” Doug jokes. “But once they saw the sign and realized what I was doing, they became more approachable. … It put a smile on their face and they were glad I did it.”

Courtney says her mom even joined in on the prank for once, standing beside Doug with jingle bells and “making a big scene” as she recorded the college student’s reaction — a video that has since been shared on Courtney’s social media.

“People were coming up to them and asking what was happening and if they were meeting their 8-year-old daughter,” Courtney explains. “He really stepped it up and tried to make it more believable now!”

“This is definitely his biggest one, with the costume and everything,” she adds. “He also did a really good job drawing the scroll and [with] his handwriting!”

After posting his most recent costume to her Instagram and Snapchat stories, Courtney said she received a ton of positive feedback from her followers — which inspired her to compile all four of her dad’s airport appearances on Twitter.

“I was like, ‘I don’t think they realize this wasn’t a one-time thing, this happens every time I go to the airport!'” Courtney explains. “So I was like, ‘I don’t really use Twitter that much anymore, but I think it would be funny if I could find all the pictures and make a collage and show my friends he’s done it before.'”

“I was just joking with him and said, ‘Watch this is gonna go viral and be on The Ellen [DeGeneres] Show. And he’s like, ‘Oh, that’s not gonna happen, you don’t know that many people!'”

Courtney certainly proved her father wrong, as her tweet has since accumulated over 3,200 retweets and 37,500 likes.

And though it’s a silly gesture, Courtney says the airport surprises mean more to her than one might realize.

“I was sending my sister some of the replies, and some of them were kinda sad,” she tells PEOPLE. “Girls were posting things like, ‘I wish my family cared about me’ or ‘I wish my dad would do something like this, you’re so lucky.'”

“That kinda put it into perspective,” she continues. “We’re lucky to say he cares so much and our parents have always been there. … I think my friends in Oregon can tell even though I live out there, I still have a really close family and we talk all the time and you see it through this kind of stuff. It’s very special.”