Every Christmas card you receive contains clues about the sender 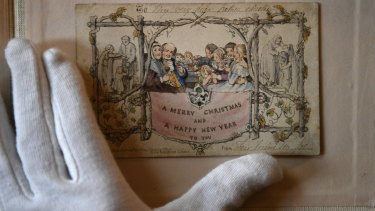 In the pecking order of Christmas cards, the one to be pushed to the front of your mantelpiece must be this year's from the British secret service MI6, featuring a series of apparent fingerprints making up a robin, a pudding, a cocktail olive, a bauble, a reindeer and a cracker. Each line of the fingerprint has a message in tiny type, directing the sleuth to the next image, until finally he's rewarded at the back of the card with the message, in a font you can only read with a magnifying glass: "Well done. Wherever you are in the world, have a wonderful Christmas and a prosperous New Year." 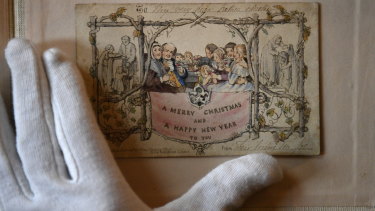 The world’s first printed Christmas card is displayed at the Dickens House Museum in London. The hand-coloured lithograph card was produced in 1843 and sold for one shilling.Credit:EPA

Now that's genius, combining the Christmassy competitive games element and the uplifting knowledge that many recipients won't know that there's an actual mystery embedded in this card, with the sentiment of goodwill as a reward at the end. If MI6 has sense, it'll be marketing cryptic Christmas cards as a set next year.

But the truth is that any Christmas card is something to be deciphered, as an indication of the character of the sender and how they view the recipient. (I'm leaving out the prigs who don't send Christmas cards at all, on account of them being environmentally unfriendly.)

Why would you want to stick someone else's family photograph on your mantelpiece?

There are all sorts of considerations that come into play here. For some reason, quite grand people and politicians send Christmas cards featuring themselves and their families, often in non-Christmassy contexts. But why would you want to stick someone else's family photograph on your mantelpiece when it says nothing at all about the season? It's the egotist's card, redolent of their assurance that you'll find them and their families attractive.

I have friends who send Christmassy pictures of their pigs, or their trees in the snow, which is more like it.

Then there's the charity Christmas card, which is a useful way of conveying your world view. Is it for a refugee welfare group, intended to tell you about the sender's liberal credentials, or an environmental charity, ditto? The nicest are pleasing but not preachy.

The unforgivable one is the card that tells you that you are not getting a present but instead a donation is being made in your name to Oxfam, or whatever, which is unacceptable when what you actually want are socks. Never send that to a child.

Then there's religious versus non-religious cards. I like Nativity scenes but I don't mind getting robins. In fact, I make it a rule to send pictures of baby Jesus to my agnostic friends and snow scenes to my priest friends.

Perhaps the best card was the first, designed by John Callcott Horsley for the social reformer Henry Cole, in 1843. It's a triptych showing a jolly domestic Christmas scene, with the family toasting the viewer, and at the sides, scenes of the hungry fed. It's philanthropic but celebratory. Perfect.

Email ThisBlogThis!Share to TwitterShare to FacebookShare to Pinterest
Labels: card, Christmas, Every, recei, you