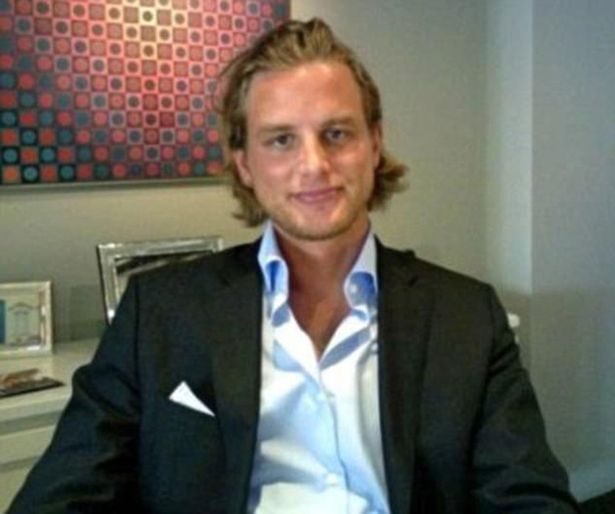 The mum of a British man brutally beaten to death by a drug-crazed Swiss aristocrat has hit out at judges who are freeing the killer after just three years.

Graduate Alex Morgan, 23, was on an Alpine ski holiday in Switzerland with his mum when Bennet von Vertes, the playboy son of a millionaire art dealer, killed him with a candelabra and shards of glass.

Von Vertes, now 34, claims he was so high on cocaine and ketamine at his parents' chalet at the time in December 2014 that he thought Mr Morgan was a green and red alien from outer space.

Mr Morgan's grief-stricken mum, Katja Faber, 56, was left outraged by the appeal court judges' decision, telling the Daily Record that she is fighting for a changes to Swiss law to keep killers like von Vertes behind bars.

Von Vertes was initially jailed for 12 years for the crime, but three judges downgraded his voluntary manslaughter conviction on appeal to the lesser charge of negligent killing last week.

They accepted his claim he was suffering from "self-inflicted insanity" and didn't know what he was doing after taking a cocktail of booze and mind-altering drugs.

It means he will be freed after treatment for drug addiction because he has already served three years.

Speaking after the case, Ms Faber, a former criminal barrister who is separated from her son's Scottish financier father, said: “To have society acknowledge that a wrong was done and my child’s life was worth something to then being told ‘no his killer is actually only guilty of getting high’ – that’s difficult.

“Clearly there is something wrong with that law that needs to be changed and I’m considering being the one who attempts to change it.”

Mr Morgan was killed at the von Vertes' villa on the Gold Coast of Lake Zurich after von Vertes downed alcohol and took ketamine, cocaine and sleeping pills.

It sent him into a psychotic state with paranoid delusions, and he claims he thought his friend was an alien, with green eyes and red ears, who was trying to kill him.

Von Vertes, whose family runs an art gallery in Zurich, stabbed Mr Morgan with shards of glass from a coffee table and bludgeoned him with a metre-long candlestick and a golden sculpture.

The killer then rammed the candlestick down Mr Morgan's throat, choking him to death.

Following the deadly attack, von Vertes was originally convicted of voluntary manslaughter in 2017.

Prosecutors asked for a tougher sentence at last week's appeal in Zurich, but the judges cleared him and gave him the maximum sentence – three years – for negligent killing.

Ms Faber, who has retrained as a bereavement counsellor, said: “The court said he’s not responsible for killing Alex but they found him guilty of getting himself in such a state that he didn’t know what he’s doing.

“They are telling me, ‘No one is responsible for killing your son’.

"It’s almost as if he is collateral damage. He knew what he was doing and willingly took those drugs. I don’t think that’s an excuse.

“I think our society needs to take stock. If you can drink and take drugs, there should be an equal responsibility which says, if you commit a crime which is so dangerous that somebody is hurt or killed, then you also have to take responsibility.

Last week, she revealed that von Vertes' family had offered her 20,000 Swiss francs (£15,500) as "emotional compensation" to pay for her son's death plus burial expenses.

She told the Times: "I was horrified and so, so hurt.

"Perhaps they hope that their penny-pinching, interest-free bank transfer will bring them momentary relief from guilt?"

Email ThisBlogThis!Share to TwitterShare to FacebookShare to Pinterest
Labels: agony, as, drug, Mum&#039;s