Police officer, 38, drowned in whirlpool while on Isle of Skye 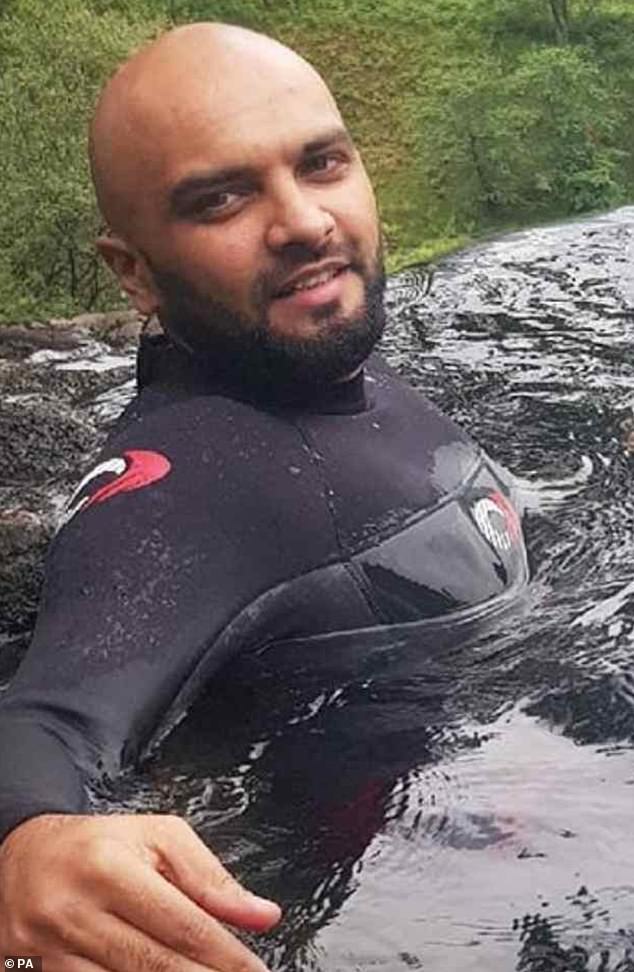 Police officer, 38, drowned in whirlpool while swimming on Isle of Skye adventure holiday when wife was expecting their fourth child, inquest hears

A policeman drowned after he was caught up in a whirlpool during an adventure holiday to the Isle of Skye.

Father-of-three PC Shazad Saddique, 38, was swimming near waterfalls when he was pulled under the frigid water by the force of the vortex.

Tourists including an off-duty French police officer managed to pull PC Saddique clear but he died despite efforts to revive him. His death, on July 19 this year, occurred while his wife was expecting their fourth child.

An inquest heard PC Saddique who lived in Oldham had joined Greater Manchester Police in 2018 and was a student officer based in Ashton-under-Lyne.

He was heavily involved in outreach work with youths in the local community, which focused on enabling youngsters to experience outdoor activities in the countryside. 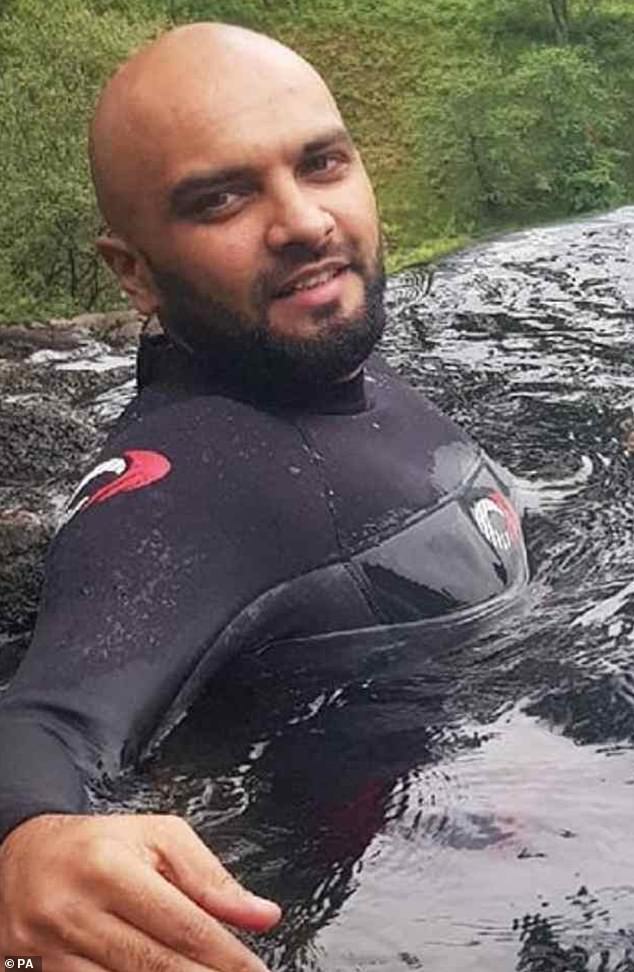 Father-of-three PC Shazad Saddique, 38, was swimming near waterfalls when he was pulled under the water and drowned while on holiday on the Isle of Skye 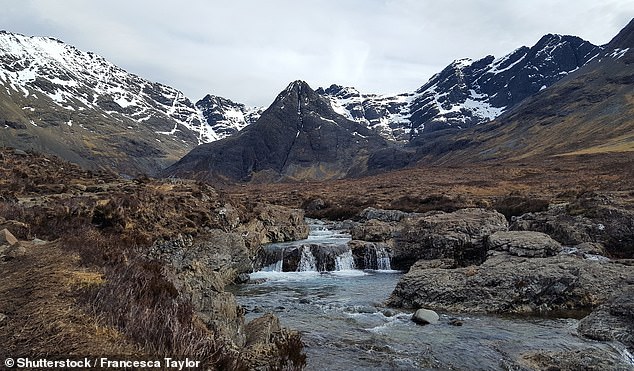 The highlight of the trip was a visit to the Fairy Pools, pictured, a natural waterfall phenomenon leading down from the Cuillin Mountain Range in Glen Brittle

He had arranged the trip to the Scottish island for 30 people including his brother and 13 year old son. The highlight of the trip was a visit to the Fairy Pools – a natural waterfall phenomenon leading down from the Cuillin Mountain Range in Glen Brittle.

In a statement read to the Heywood hearing family friend Temour Ahmed said: ‘It wasn’t organised as a charity event but those going had agreed to make a donation to charity and we would be away for three nights and four days.

‘I met Shazad on the M6, we drove up to Glasgow together and it was agreed we agreed to get up early and leave the accommodation about 5am to get to Skye.

‘Everybody was in good spirits and looking forward to it. We arrived at the hostel at around 10.30am.

‘Some of the groups decided to remain at the hostel as they were tired but myself and Shazad and two others decided to go to the Fairy Pools.

‘It was about a 40 minutes drive and Shazad was wearing a fully fitted wetsuit and goggles and swimming shoes.

‘There are small pools connected by waterfalls and Shazad had gone swimming in different pools and continued to do that for about an hour an hour and a quarter.

‘I watched him jumping in from height and he was generally having fun. 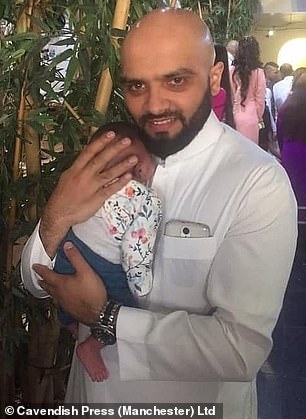 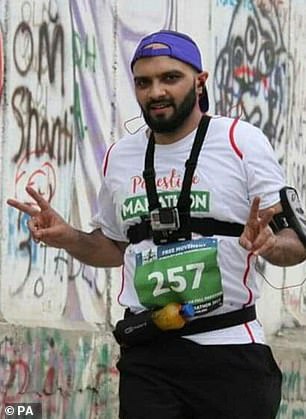 ‘I went to sit on a rock about 15 metres away from the pools to have something to eat and I couldn’t see the pool where Shazad was.

‘Then I heard people shouting and went to the pool I could see Shazad was unresponsive in the water. I tried to get into the water but there was a very strong undercurrent which was pulling my trousers down so I got out.

‘A bystander gave me his walking stick to try help but there wasn’t much I could do with the stick because of the current. It was looking like a whirlpool effect.

‘Eventually we were able to get to Shazad from the water but sadly his lips where blue and he was totally unresponsive. Efforts were made to resuscitate and we were doing CPR for 15 minutes.

‘Whatever happened to Shazad happened very quickly and he couldn’t have been in the water for more than a couple of minutes.’

PC Saddique’s brother Javed told the Heywood hearing: ‘I arrived at the pools at about 1pm and saw another male coming down shouting about somebody having drowned. I approached and then realised it was my brother they were talking about.

‘People where trying to resuscitate Shazad. One of the bystanders had been been there about 45 minutes by the time I arrived.

‘My only concern was I wasn’t sure when and how long after somebody had called for emergency response. I was there and I was resuscitating for at least half an hour. By my calculation it was about 2pm before somebody arrived. I didn’t understand why it took so long for someone to respond especially for a drowning. It’s something I’ve not been able to uncover. ‘

Police coroner’s officer Paul Lever said: ‘Shazad was an incredibly healthy and fit young man. He enjoyed walking and running and really promoted that in others. He was great on encouraging others to lead healthy lifestyles and he was very family orientated. He enjoyed his role as a police officer and was keen to progress with Greater Manchester police.’

Recording a conclusion of death by drowning coroner Joanne Kearsley said: ‘On July 19, 2019 at approximately 1pm Shazad got into difficulties whilst swimming in the Fairy pools on the Isle of Skye.

‘More likely than not he became caught up in a strong current which created a vortex effect. Bystanders pulled him from the water and started attempts to resuscitate him. Paramedics attended and continued efforts to resuscitate but these were unsuccessful. 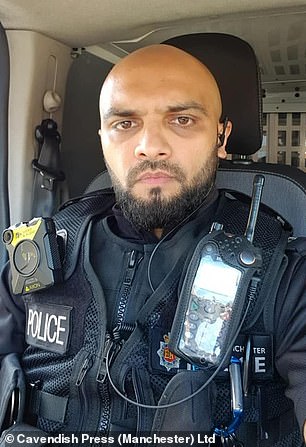 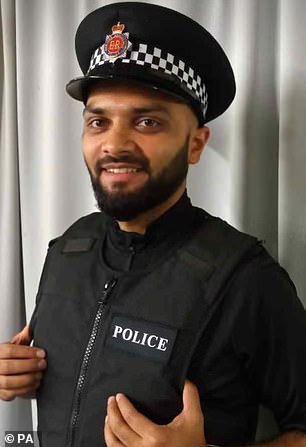 GMP Chief Constable Ian Hopkins said: ‘Shazad was described as a role model for young British Muslims, combining his faith with being a proud British citizen and serving his community through policing. He was taken far too soon and he will be sadly missed’

‘This is a very, very sad case which started out as a joyful trip to be shared with friends and family but ended in huge tragedy. It’s clear Shazad was a publicly supported man, very loving with a young family and a role model to those who came into contact with him.

‘It’s clear to me he touched the lives of many family and friends and others in the community and also through community and charity work he did and his work as an officer in Greater Manchester Police.’

PC Saddiques’s family have since launched the charity Green Escapes Trust (GET) in his memory which helps arrange for members of his loocal community to go on adventure trips around the UK.

In a statement they said: ‘Shaz was the most selfless person you could ever hope to meet; he always put other people first and wanted to make every new experience a fun one.

‘He had a real passion for the outdoors and helping others, particularly young people in the community. Deep in his heart, he felt very strongly about youth outreach programs and getting young people out in the countryside to do fun activities. He was sincere in his devotion and worship and he loved nature for the very fact that it was a means for him to remember and praise his lord.

‘His final trip to the Isle of Skye was sincerely to gather a group and collectively praise Allah, as a spiritual retreat.

‘He achieved so much and we were always so proud of him. He completed marathons all over the world and did hiking challenges throughout the UK, all in the name of raising money for charity.

‘He loved his family more than anything; he was a supporting figure and a role model for his siblings. He was the best dad, and his wife and kids were his absolute world.’

GMP Chief Constable Ian Hopkins said: ‘Shazad was described as a role model for young British Muslims, combining his faith with being a proud British citizen and serving his community through policing. He was taken far too soon and he will be sadly missed.’

Email ThisBlogThis!Share to TwitterShare to FacebookShare to Pinterest
Labels: 38, drowned, In, officer, Police