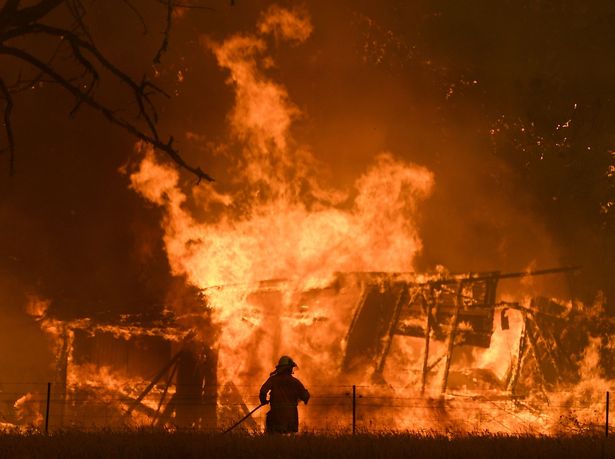 Raging Australian bush fires have left people "choked", according to an Irish woman who watched ash cover her baby's pram.

Kate Byrne said she'd "never seen or smelled anything like this" with smoke suffocating the air despite the out of control fires burning four hours away from her home near Bondi, Sydney.

The new mum, who is originally from Drogheda, Co Louth, said she'd "barely seen sunshine all summer" and there's no rain with visibility so bad the Opera House could not be seen from the Harbour Bridge some days.

Having lived Down Under for nine years, Kate is set to return home to Ireland with husband Sam and seven-month-old daughter Saoirse in the New Year to take up a job with Tourism Ireland, reports the Irish Mirror . “I woke up one night at 2am and I honestly thought that I’d left my cooker on and that something was burning," she said.

“I took seven-month-old daughter Saoirse out for a walk one day to get some fresh air, which was a big mistake.

“Everywhere is so dusty and I actually saw ash falling on top of her pram. “A guy we know left his trainers on the balcony overnight and they were full of ash the next day.

“You’re choked with the smoke and every afternoon the atmosphere is orange and the sun is this weird pink colour.

“It’s crazy the colours you see, it’s not normal. I’ve never seen anything like it before. “We’ve barely seen sunshine all summer and on top of that there is no rain. Visibility is so bad, you can’t even see the opera house while crossing the Harbour Bridge some days.”

The bush fires in Australia have reached a new ferocious peak in the run up to Christmas.

At one time four distinct fires have burned at warning level, while temperatures rocketed to over 40-degrees and choked smoke flooded Sydney. Some of the biggest victims of the blazes have been koalas.

More than 1,000 koalas are thought to have died in the fires which have killed six people since October.

Slow-moving koalas, who curl up in trees to avoid danger, have been trapped by flames and heard to yelp in distress.

Fires engulfing more than 3.7 million acres of eastern Australia have also destroyed 80% of their habitat.