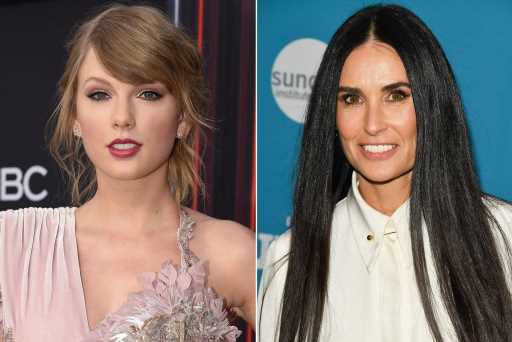 From one highest-paid superstar to another, Taylor Swift has Demi Moore’s back.

In PEOPLE’s latest cover story, the singer — who is one of four entertainers honored as People of the Year — reveals one of her favorite books of 2019 was the actress’s memoir, Inside Out.

“I couldn’t put it down. You read it in two days!” says Swift. “I was thinking about how when she was the highest-paid actress, she was just punished ruthlessly for it. That’s so wrong, and she was treated so badly in that moment.”

In Moore’s New York Times best-selling memoir, the 57-year-old star got candid about the ups and downs in her life as she balanced her career and raised three daughters while navigating three marriages (including to ex-husbands Bruce Willis and Ashton Kutcher.”

“I feel like finally she’s getting the last laugh because [now] people are like ‘Yeah! That’s great that you were the highest-paid actress,'” says Swift. “She owns a lot in the book, and it’s really well-written.”

Moore’s memoir begins by recounting her childhood moving around the country before her family settled down in southern California, and her traumatizing rape at age 15.

“It’s exciting, and yet I feel very vulnerable,” Moore previously said of her book’s release. “There is no cover of a character. It’s not somebody else’s interpretation of me.”

As for herself, Swift has similarly embraced her own voice — and power — more than ever as she approaches her 30th birthday on Dec. 13.

The star was named by Forbes as the highest-paid celebrity in 2019 and reportedly raked in $185 million due in large part to her massive Reputation Stadium Tour.

After wrapping the tour, Swift — who is gearing up for her new tour, Lover Fest — says she felt empowered to write music in a way she was never able to before.

“There was so much theatricality in the darkness of reputation. It was secretly a love story, but it was also filled with angst, rebellion and this vengeful taking back of your life,” she says. “Lover ended up being the album [where I was no longer] answering to something. In the past, I’ve definitely used my criticism as a jumping-off point for creativity. With reputation, I’d said everything I needed to say. I’d been tried in every possible way people could throw things at me, and I felt like now I just get to create.”

This article originally appeared on People. For more stories like this, visit people.com.